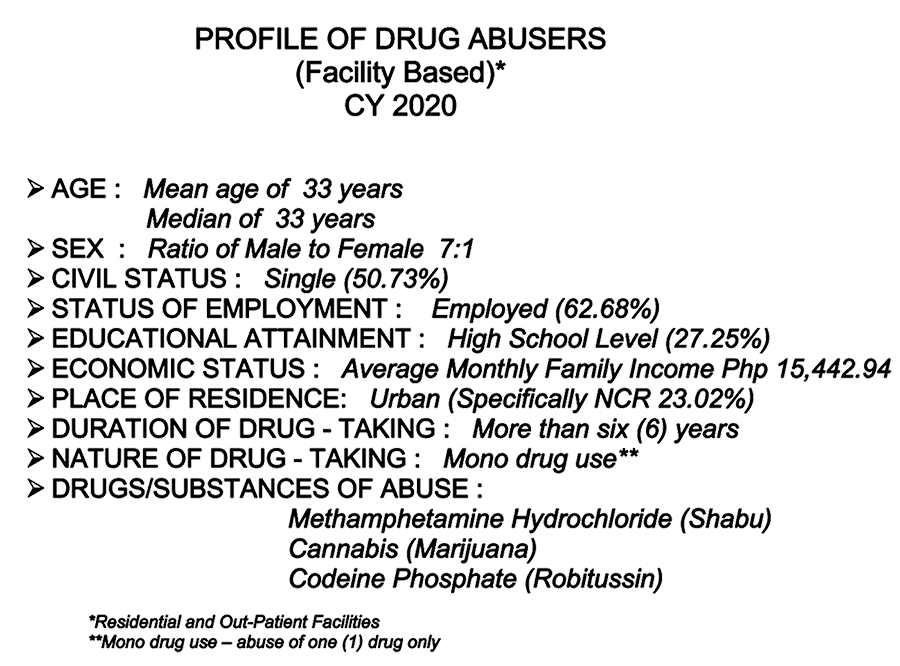 For the year 2020, a total of fifty (50) treatment and rehabilitation facilities reported to the  Treatment and Rehabilitation Admission Information System (TRAIS). Of this, forty-eight (48) are  residential and two (2) are outpatient.

From the facilities reporting, a total of two thousand, three hundred eighty-five (2,385) admissions were recorded. Eighty-one percent (80.50%) of this are new cases, less than one  percent (0.84%) are readmitted or relapse cases and around nineteen percent (18.66%) have  undergone treatment in an outpatient facility. Though some facilities have reported that they have  no admissions for the year.

The pandemic that affected not only the country but the global community has caused a  significant decline of more than half or fifty-four percent (54.37%) in admission as compared to  the previous year. As part of the protocol and response to the COVID-19 pandemic, the Department of Health issued Department Memorandum No. 2020-0118 dated March 17, 2020  entitled: “Suspension of Admissions and Group Activities in all Drug Abuse Treatment and  Rehabilitation Centers, Outpatient Treatment and Rehabilitation Facilities, and Community Based  Drug Rehabilitation Centers and Community Based Recovery Clinics and other Guidelines During  the Coronavirus Disease 2019 Situation”. With this directive, there were some government drug  treatment and rehabilitation centers that were used as COVID-19 facilities and the rests continued  to admit clients during the latter part of the year.

The center admissions comprised of eighty-eight percent (87.84%) males, around twelve  percent (11.78%)% females, and less than one percent (0.38%) of LGBT. The ratio of male to  female is 7:1 with a computed mean and median of 33 years old. The youngest admission for  the year under review is 6 years old while the eldest is 67. The highest percentage belongs to  age group of 40 years old and above with twenty-nine percent (28.97%).

Fifty-one percent (50.73%) of the total admitted cases are single and around twenty-six  percent (25.79%) are married, followed by those who have live-in partners with eighteen percent  (17.95%), and the rest which comprised of about six percent (5.53%) are either widow/er,  separated, divorced or annulled.

As to educational attainment, twenty-seven percent (27.25%) of the center clients have  attained high school level, followed by those who have reached college (20.96%) and those who  have graduated high school (18.03%).

The average monthly family income as reported by the clients is more than fifteen  thousand pesos (Php 15,442.94).

With regard to the status of employment, those employed (either workers/employees or  businessman and self-employed) comprised sixty-three percent (62.68%) while thirty-one percent (31.32%) unemployed. Four percent (4.49%) of the admission constitute students and one  percent (1.17%) out-of-school youth while few (0.25%) did not disclose their status of  employment.

Around twenty-three percent (23.02%) of reported cases are resident of the National  Capital Region while twenty-one percent (20.67%) from Region XI.

The primary drug of abuse remains to be Methamphetamine Hydrochloride, commonly  known as “Shabu” which comprised of eighty-nine percent (89.18%) of the total admission,  followed by Cannabis (Marijuana) at twenty-five percent (25.32%). Surprisingly, Codeine Phosphate with one percent (1.47%) appeared to be the third choice of drug. The seemingly  preventive response for flu-like symptoms which are common in COVID-19 may be one of the  reasons that made this drug among the top three drugs commonly used by center clients during  the reporting year.

Mono drug use is still the nature of drug taking and the routes of administration are inhalation/sniffing and oral ingestion.