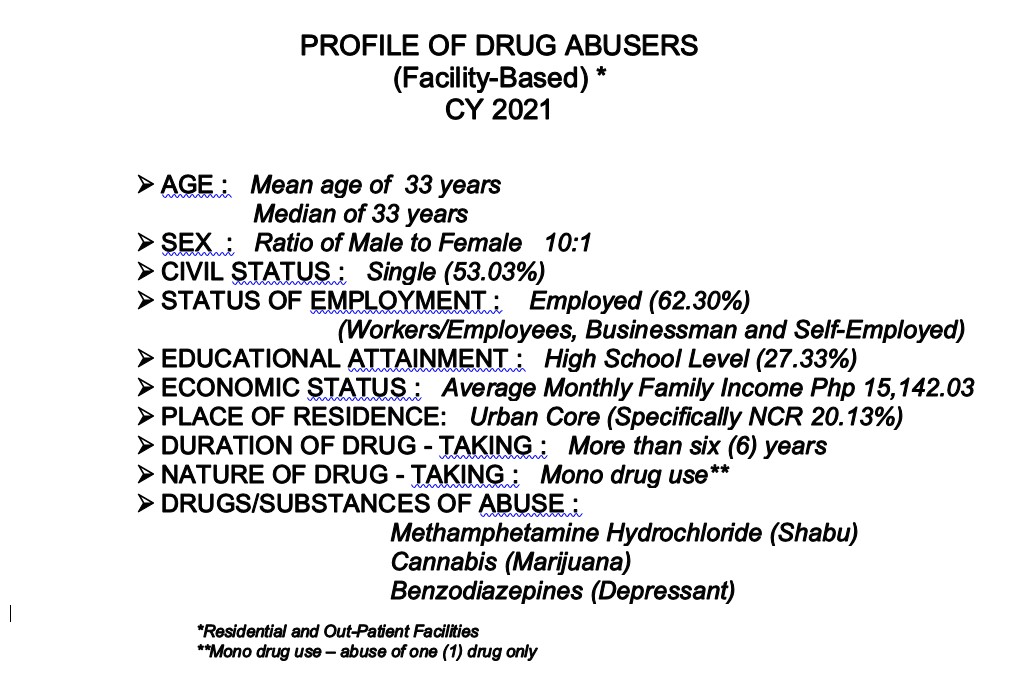 For 2021, a total of sixty-three (63) treatment and rehabilitation facilities reported to the Treatment and Rehabilitation Admission Information System (TRAIS). Of this, fifty-eight (58) are residential, and five (5) are outpatient.

As culled from these facilities, two thousand seven hundred eight (2,708) admissions were recorded. Out of this number, two thousand three hundred seventy-two (2,372) were inpatient with 2,344 (86.55%) new cases and 28 (1.03%)  readmitted or relapse cases. On the other hand, only  336 cases (12.41%) have availed of outpatient treatment. Some facilities reported no admissions for the year.

Comparing with the cases of the previous year, around fourteen percent (13.54%) increase in admission was noted. The rise in admission can be attributed to the resumption of operation by the different rehabilitation centers and the seeming willingness of the PWUDS to undergo treatment and rehabilitation as evidenced by forty-two percent (41.54%)  of voluntary submission cases.

The center admissions consist of ninety percent (90.47%) males, around nine percent (8.83%) females, and one percent (0.70%) LGBT. The ratio of male to female is 10:1 with a computed mean and median age of 33 years old. The youngest admission for the year under review is 13 years old while the eldest is 66. Majority of the admissions belong to the 40 years old and above age group with twenty-eight percent (28.40%) cases.

Fifty-three percent (53.03%) are single and around twenty-five percent (24.74%) are married, those who have live-in partners comprised seventeen percent (17.43%), and the rest, about five percent (4.80%) are either widow/er, separated, divorced, or annulled.

About the status of employment, those employed (either workers/employees or businessman and self-employed) comprised sixty-two percent (62.30%) while unemployed by thirty-two percent (32.05%). Around five percent (4.54%) of the admission constitute students and almost one percent (0.96%) out-of-school youth while few (0.11%) were pensioners.

Twenty percent (20.13%) of reported cases are residents of the National Capital Region while seventeen percent (16.80%) are from Region III.

The leading drug of abuse remains to be Methamphetamine Hydrochloride, or “Shabu” which comprised ninety-two percent (91.80%) of the total admission, followed by Cannabis (Marijuana) at twenty-six percent (26.29%). Benzodiazepines is the third drug of choice, and this could be because these are sedative medication used to address anxiety, insomnia, and seizures, including certain Covid 19-related mental health problems. On the other hand “LSD”, which was seen to be an emerging drug in 2020, occupied the 11th rank this reporting year.

Mono drug use is still the nature of drug-taking and the routes of administration are inhalation/sniffing and oral ingestion.